Pre-Trial Detention Time Limits: The Law on Paper and in Practice 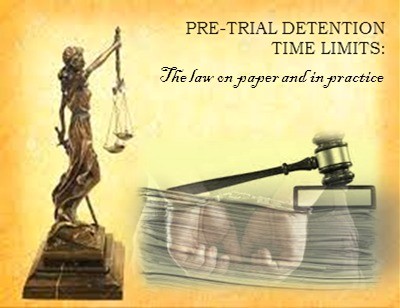 Malawi adopted a new constitutional order in 1995. Chapter IV of the order enshrines a bill of rights that, among other things, prohibit the violation of the one’s right to liberty[2], dignity[3], a fair and speedy trial[4], torture and other ill-treatment[5]. However, despite Malawi’s criminal justice system and despite Malawi labouring to adhere to the fair trial and human rights standards set out in the Constitution, just like other countries in Africa, the excessive and extended pre-trial detention limits of accused persons continues to be a challenge faced especially by the poor and powerless.

Part IVA of the Criminal Procedure and Evidence Code[6] further entails pre-trial custody time limits, which are specific periods of time for which accused people may be held in lawful custody while awaiting the commencement of their trials. A person accused of an offence that may be tried in a Subordinate Court and the High Court can legally be held in custody pending the commencement of their trial for a maximum period of 30 days. However, recent research shows that in practice, it is not uncommon for persons accused of such offences to be kept in custody for more than 30 days as the legislation does not explicitly stipulate any means of tracking custody time limits[7].

The law states that on the expiry of a custody time limit or of any extension thereof, the court may grant bail to an accused person on its own motion or on application by or on behalf of the accused person or on information from the prosecution[8]. In the absence of the actual commencement of the trial or extension of the custody time period, further detention of the accused is no longer legal. While an accused may be very well much aware of the time they have spent in detention, most people in custody have neither the means nor the knowledge to approach the courts for release. The Courts and prosecution, on the other hand, may be ignorant of how long a particular detainee has been in custody, given the abundant amount of matters in their hands and the absence of any particular mechanism to bring it to their attention.

Prisons still operate on remand warrants which are simply renewed as a formality by magistrates, with no attention being paid to the overall time period that an accused may already have spent in custody. Remand warrants are at times renewed without the accused even appearing before the court. Clearly, the original intention of the fortnightly warrants-that the magistrate would have an opportunity to check on the health of the accused and the progress of the case, and in turn, the accused would be able to approach the court for relief of whatever nature- has been subverted in practice.

Another process that seems to prolong accused persons’ pre-trial detention periods is that of committals. Committal is a procedure whereby a case is formally transferred from the subordinate court to the High Court. Recent research found that a great deal of the delay in relation to offences to be heard in the High Court emanated from committal proceedings, mainly murder trials. Once again, nothing appears to be in place to ensure adherence to time limits in these cases.[9]

As of 2021, there have been recent developments to ensure that one’s rights to a fair and speedy trial are implemented. In Awali Matemba vs The Republic[10] the accused was remanded at Chichiri Prison for 14 years and no warrant of commitment or any documentation was available in connection to his case.  Upon application for release from his unlawful detention, the Court placed emphasis on the liberty of persons but it also placed a burden on the State to commence trial proceedings within the 90-day limit, failing which the State has the duty to release such accused person automatically as it amounts to unlawful detention. The Court also gave accused persons the liberty of demanding compensation from the State for such unlawful detention.

In conclusion, the Constitution of Malawi lays a solid foundation for the observance of fair trial rights for all accused people, including pre-trial detainees. Although the criminal procedure rules were amended in order to accommodate international standards of fair trial rights, the major challenges facing the Malawi criminal justice system are due to structural and functional failures within key institutions. The system can be improved dramatically by promoting greater awareness of these rights amongst accused persons in prisons, increasing the use of non-custodial measures such as diversion, enhancing cooperation between criminal justice institutions through mechanisms such as court users meetings and the homicide working group and lastly, by ensuring that there is firm judicial control over every stage of criminal proceedings to check and reduce transgressions of the law.

[1] Victor Chagunyuka Mhango, is the founder of the Centre for Human Rights Education, Advice and Assistance (CHREAA) in Malawi. He has a vast experience in the Area of human rights, he is also Inspector of the Malawi Inspectorate of Prisons.

[2] The Constitution of the Republic of Malawi, Section 18