Pre-trial justice in the Commonwealth – challenges for 2022 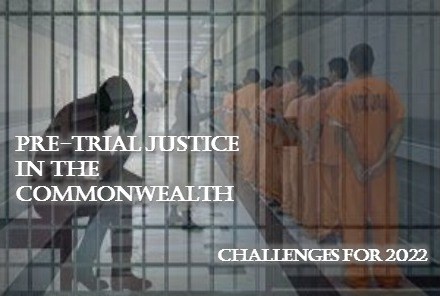 According to the current prison occupancy levels shown on our World Prison Brief database, over 60% of Commonwealth countries are running their prison systems above official capacity – many of them at well over 150% of capacity. One of the biggest causes of prison overcrowding is the misuse of pre-trial imprisonment – the detention of individuals in custody prior to their conviction or definitive sentencing.

This problem deserves more attention that it gets. Prison overcrowding leads to human rights abuse, violence and re-offending. It also presents a serious public health risk, more so during a pandemic.

Presently, around a third of the world’s estimated 11 million prisoners are in pre-trial detention.[2] The number of pre-trial detainees (also known as remand prisoners) has increased by a third in the last two decades. In much of the Commonwealth, numbers have gone up by a greater margin, for example trebling in Australia and New Zealand.

Many Commonwealth nations have more remand detainees than convicted prisoners. In India, pre-trial detainees represent 76% of the prison population; in Nigeria, they make up 72%; in Trinidad and Tobago, 60%.

The available data, then, present a troubling picture of over-use of imprisonment around the world, with the situation worse in many Commonwealth countries.

The misuse and over-use of pre-trial imprisonment is an entirely preventable infringement of fundamental rights. It often goes hand-in-hand with poor resourcing of criminal justice systems and overly easy resort to custody for fairly minor law infringements or matters that need not be criminalised.

Many Commonwealth countries have suffered years of under-investment in their criminal justice systems, including both in courts and prisons. And many retain harsh sanctions for petty, colonial era offences such as vagrancy – as well as routinely using short prison sentences for non-payment of fines and for newer crimes related to, for example, breaching Covid restrictions or attending protests.

Although legal systems, in line with international standards, refer to pre-trial detention as an ‘exceptional measure’, its use is often the norm in practice. Our recent research, conducted in a diverse group of ten countries (including five in the Commonwealth), revealed a gulf between law and practice relating to the use of pre-trial imprisonment. We found that the real problem is a set of socio-economic and systemic factors that influence the law’s (mis)application.

The 2022 Commonwealth Heads of Government Meeting in Rwanda offers an opportunity to refocus on reducing misuse of pre-trial detention and thereby helping to ease prison overcrowding. As part of this, there must be a commitment to accurate, timely prison population data so that trends can be monitored and prisons properly resourced. A failure to act on this issue will leave us all less safe.

Read ICPR’s report on pre-trial imprisonment with recommendations for reducing its use.

[1] Catherine Heard directs the World Prison Research Programme at the Institute for Crime & Justice Policy Research (ICPR), at Birkbeck, University of London. The Programme explores the causes and effects of changes in world prison populations. ICPR compiles and hosts the World Prison Brief, an online database holding statistics and other information on prison systems worldwide.