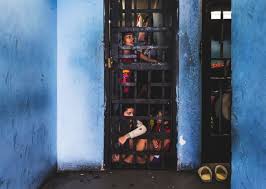 Globally, there are over three million people held in pre-trial detention and other forms of remand imprisonment throughout the world with a 30% rise of pre-trial detainees globally since the year 20002. Excessive use of pre-trial detention has continued to leave a very damaging impact in its wake specifically for women who come into contact with the law, violating various human rights, increasing poverty, family break ups, straining government resources and undermining the rule of law.

In Sierra Leone, existing research indicates that pre-trial detention continues to be excessively used both for women and men.3 AdvocAid and the Vance Center have documented that almost three quarters of women in prison are in pre-trial detention.4

Most of the women in pre trial detention are poor, caretakers of their families and cannot meet strict bail conditions or pay for the services of a lawyer to represent them, particularly because the vast majority of women in prison in Sierra Leone are marginalized, illiterate, petty traders and the sole caretakers of young children.6 A large portion of female defendants are thus arrested for petty offences, which are often committed to ensure their survival and that of their families.7

Ramifications of excessive use of pre trial detention

In spite of the fact that most international treaties provide that pre-trial detention should only be used as a measure of last resort in criminal proceedings8nearly 15 million people globally go through pre trial detention - three million on a given day.9 The profound impact on individuals, communities and a nation as a whole caused by the arbitrary use of pre trial detention cannot be over emphasised. The loss of income, unemployment, strained financial circumstances from having to support a detained member, broken families and also have to deal with the social stigma associated with detention and strained government resources should not be overlooked.10

Pre-trial detention is a major cause of prison overcrowding. Incarcerated individuals also commonly have poorer health than the general population, and often suffer from underlying conditions. These circumstances combined with the substandard hygiene conditions and infrastructures found in most correctional centers, put the health of both those detained and prison staff at great risk now even more as we face the unprecedented challenges that the COVID-19 presents noting that some children are imprisoned with their mothers with up to about one and half million a year.

It is imperative to note that it is the poor of the society that bear the brunt and burden of the negative impact of pre trial detention with those unable to post bail due to financial constraints having to stay in detention longer until their cases are solved defeating the purpose of presumption of innocence for all if only the rich can meet bail conditions and leave pre trial detention.

Considering the ramifications of pre trial detention, it can be agreed that it should be the exception not the norm. Global consensus agrees with the use of alternative measures to deal with the pre trial detention phenomenon including the decriminilising of laws that result in pre trial detention for petty offences, avoiding use of custodial measures through use of paralegals who can help to ease pre-trial detention for example for AdvocAid done through monitoring police stations, detention facilities and courts, mediating, preventing corrupt bail practices and family tracing. Additionally, alternative dispute resolution, diversion, halfway houses, and bail conditions could be determined depending on period in detention or individual circumstances plus revising laws (particularly laws on drug offences) which sometimes do not allow for alternatives to detention.12 Further, Courts could prioritise use of community service, proper case management, consideration of gender specific needs of women in detention13 and also introduce time limits for cases to facilitate review for release or granting bail.14

The uninhibited use of pre-trial detention without urgency to consider alternative measures will inadvertently continue to adversely impact individuals, communities and nations as a whole and is an issue that should not be overlooked or we risk elusive justice for the most vulnerable in our communities. The socio economic impact of excessive use of pretrial detention cannot continue to be disregarded especially that there are success stories from alternative measures to its use.15