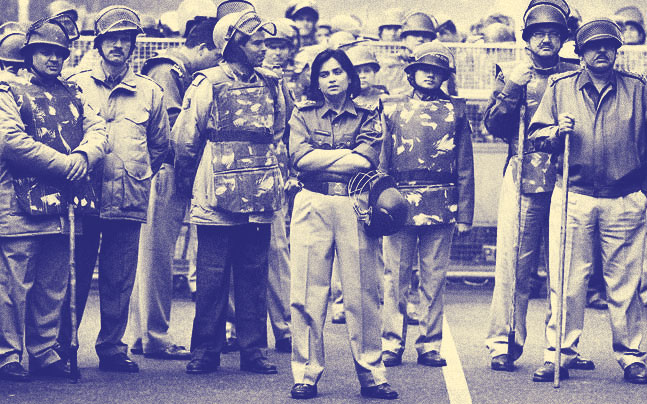 As of 1 January 2017, the strength of women police in India was 7.28% of the total police.[1]This low representation of women is despite state governments setting reservation targets for women in the police ranging from 4% to 38%. Of the 7.28%, 0.85% belong to supervisory ranks, 9.76% to investigative ranks and 89.37% to the constabulary. These numbers are reflective of the exclusion of women in policing -- especially at investigative and leadership levels. This inordinately affects the quality of policing. Yet, police recruitment continues to be irregular and scanty. With the ongoing elections and renewed promises of contesting parties regarding police reforms, it is important to analyse whether police reforms include better representation of women in police and improved conditions of work for them.

The manifestos of the Indian National Congress (INC) and Bharatiya Janata Party (BJP) – the two major political parties at the centre in India -- prioritise police reforms, but in a restrictive way. Both parties pledge that if voted to power, the Centre will pass a new Police Act based on the Model Police Act,[2]modernise the police and make the police force upholders of human rights. The INC promises to “ensure” that the benchmark target of 33% is achieved in recruitment and promotion of women constables and officers. On the other hand, the BJP does not prioritise increasing representation of women in the police. In this context, we need to remind the governments of the value of women in policing and steps needed to achieve reservation targets for women in police.

Value of women in policing

A police service must be representative of all sections of the society it serves. Diversity in gender, ethnicity and religion will ensure that the police service is not dominated by a single section of the community. This not only ensures equal opportunity to work, but also wider access to justice, especially to women and children. United Nations Women collected data across 39 countries which showed that the presence of women police correlates positively with reporting of sexual assault, confirming that recruiting women is an important component of a gender-responsive justice system.[3]

Several studies show the value of women in policing, not just in handling violence against women but other inherent aspects of policing. This is due to the experiences and realities of women that are different from those of men. A study from 2010 observed: “twenty years of exhaustive research demonstrates that women police officers utilise a style of policing that relies less on physical force, and more on communication skills that defuse potentially violent situations. Women police officers are therefore much less likely to be involved in occurrences of police brutality, and are also much more likely to effectively respond to police calls regarding violence against women.”[4]

Since policing is a subject under List II of the Constitution, state governments and the Union Home Ministry are entrusted with decision-making on policing in states and union territories respectively. The Union Government can set standards that guide decision-making in states, but these are in no way binding on the state governments. To increase women’s representation in policing, the Union Government issued advisories over the years.

In 2009, the Union Home Ministry set 33% as the benchmark target for women’s representation in the police. Apart from the Union Territories, only nine states adopted 33% reservation,[5]five states 30%,[6]Bihar 38% and five states below 30%[7]. Nine states are yet to set targets.[8]

In 2013, the Union Government recommended each police station to have at least three women Sub-Inspectors and 10 women police Constables to ensure women help desks are staffed at all times.[9]

In 2015, the Union proposed creating Investigative Units for Crimes Against Women (IUCAW) at police stations in crime-prone districts across states.[10]These units are to have 15 specialised investigators dealing specifically with crimes against women. At least one-third of the investigative staff are required to be women.

These advisories set important standards for policing, especially to handle crimes against women and children. But they cannot be implemented until there is adequate representation of women in the police. And these standards are going to stay only on paper till there is political will to bring appropriate policies in place and finally to implement the advisories.

Recruitment and promotion of women police are important to increase women’s representation at different levels. To increase the numbers of women police at all levels, states should make commitments to maintain equitable balance of men and women. Recruitment procedures should be conducted in a systematic and phased manner to achieve proportionate representation of women. Departments should create common and combined posts and assign clear targets for the number of women to be recruited in every recruitment year at all levels. Special measures must be taken to ensure 33% reservation in direct recruitment for all posts at each entry level, specifying differential physical requirements for women. If the assigned seats are unfilled by women, states should carry these forward and conduct special recruitment drives to fill long pending vacancies. This data must be maintained in a disaggregated format and be subject to scrutiny. If the assigned numbers are not met, authorities must be held accountable.

Departments should conduct district-wise recruitment drives across the state to ensure geographic diversity and representation from groups based on caste, class, religion, ethnicity or any other factor. To publicise the opportunities for women in police, departments should collaborate with local media and educational institutions.

Retention of women police is equally important. Data published by the Bureau of Police Research and Development shows the decrease in the strength of women police over the years.[11]Studies show that some of the key reasons for the high attrition rate of women police are sexual harassment and gender discrimination.[12]Unless state governments make the institutions gender-friendly and create facilities that cater to the needs and roles of women, retention of women police is challenging. This includes setting up creches, preventing sexual harassment at workplace and building separate rest-rooms. It is unfortunate that even police training schools do not have these facilities, not even those as basic as separate washrooms. In such a situation, the urgent need for setting up basic necessities for women police at workplace cannot be over-emphasised. These are not only required at the police station level, but also at district headquarters, police outposts, traffic police and training schools.

Simultaneously, governments and police departments should ensure that women police are given similar opportunities as their counter-parts in contributing to hard-core policing. Serving women police have expressed that they are likely to be assessed less competent and considered less suitable for positions with a high level of responsibility and challenge.[13]Women’s role cannot be restricted to answering calls on 100, making diary entries or to all-women battalions/units.

Despite the continued presence of these issues, no government has attempted to conceptualise a comprehensive policy to make the police service more inclusive in the real sense. Unfortunately, the manifestos do not seek to address any of these concerns and needs. Merely creating policies that promise a certain target of reservation does not ensure that as many women are actually recruited and promoted. Any government that comes to power must create a level-playing field to truly open up opportunities and cater to the requirements of diverse sections of the society. We must remember that policing needs women for the values and quality that they bring in, and it is not the other way round.

[2]17 states have passedPolice Acts after the Supreme Court’s judgment in Prakash Singh and Ors. vs. Union of India and Ors. (2006) SCC 1

[13]Alankrita Singh, From Reel to Real Life, Challenges Faced by Women in Police Are Manifold, https://thewire.in/women/woman-police-officers-india